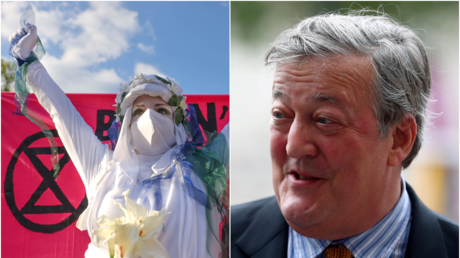 Stephen Fry has been chewed out by resentful Twitter users after the well-off actor announced his support for Extinction Rebellion demonstrations in London, claiming the radical group was moving the world towards necessary change.

The global collective of climate change activists, known for its apocalyptic eco-prophecies, as well as its often highly theatrical protests, is planning to carry out two weeks of “mass civil disobedience” in the City of London starting on Monday.

Extinction Rebellion (XR) said that its “new immediate demand” was for the UK government to “stop all new fossil fuel investment immediately,” and vowed that around-the-clock “disruptive” protests would continue until their conditions were met. XR described the strategy as an “occupation” of the city.

The ambitious plan had already received an endorsement from Fry ahead of Monday’s commencement of events in the city. On Friday, the famous actor and comedian posted a video in which he praised XR for “sensibly” moving the world in the right direction, even if they sometimes “make a fuss.”

“But what else is going to make politicians really recalibrate, realign, revolutionise politics so that it faces the horrors of climate change and all the damage we’re doing to our planet? … Unless we recognise that everything has to change then nothing will change,” Fry argued.

He noted that while people will “point the finger of hypocrisy” at everybody who drives a car, people will need to begin to re-think “the way we live our lives” and “the way society works.”

“Extinction Rebellion seem to be the only people who are sensibly, even if angrily, even if energetically, trying to move society and the world towards this,” Fry insisted.

But Fry’s argument failed to sway many on social media.

A number of Twitter users felt Fry was not being sincere, due to the lavish lifestyle he enjoys.

Rank hypocrisy from the same people who holiday twice a year in a far away land, own multiple houses, 4x4s, travel by private jet and Tweet at me not to eat meat, via their latest planet destroying iPhones.

Laws for thee, not for me. The battle cry of the global warming hypocrites. Emma Thompson making an appearance again ? After flying first class from LA ?Maybe Leo Di Caprio can flying in on his private jet or Charles and William can use the family helicopter avoiding traffic.

Specifically, people wanted to know about the status of the actor’s pricey Bentley.

Others felt Fry’s insistence that “everything” needed to be changed or nothing would improve was not reasonable.

“A nice sensible balanced view,” quipped one observer sarcastically. “Exactly when did he morph into a ‘Eco Loon’?”

Others criticised XR for boasting about Fry’s “celebrity endorsement,” accusing the group of acting as if it were selling a product, like “shampoo or a tin of beans.”

“We need honest discussion and then let the people decide if you are right.”

Not everyone was critical of Fry’s call to action. One Twitter user thanked the actor and expressed hope that he would “join them on the streets.”

Thank you so much Stephen. I hope you may come and join us on the streets xx

Organisers of the London demonstrations have said they expect thousands of people to participate, adding that the city’s public transportation system would not be targeted – a tactic used in previous London protests, causing anger and pushback from critics.

Also on rt.com
Extinction Rebellion’s infantile plan to cause chaos in London will only put off those it supposedly wants to attract to its cause